The four main islands of Japan 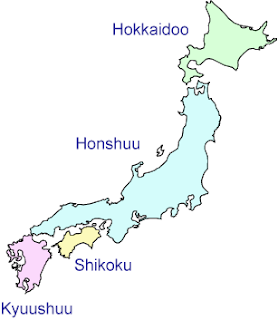 Japan covers an area of 145,914 square miles (377,915 sq km) that is spread out over its more than 6,500 islands. Four main islands make up Japan however and they are where its main population centers are located.

The four main islands, from north to south, are Honshu, Hokkaidoo, Shikoku, and Kyuushuu; Honshuu is the largest and referred to as the Japanese mainland.

Honshu is the largest island of Japan and it is where the majority of the country's cities are located (maps). The Tokyo Osaka-Kyoto area is the core Honshu and Japan and 25% of the island's population lives in the Tokyo region. Honshu has a total area of 88,017 square miles (227,962 sq km) and it is the world's seventh largest island. The island is 810 miles (1,300 km) long and it has a varied topography that includes many different mountain ranges, some of which are volcanic. The highest of these is the volcanic Mount Fuji at 12,388 feet (3,776 m). Like many areas of Japan, earthquakes are also common on Honshu.

Honshu is divided into five regions and 34 prefectures. The regions are Tohoku, Kanto, Chubu, Kansai and Chugoku.

Hokkaido is the second largest island of Japan with a total area of 32,221 square miles (83,453 sq km). The population of Hokkaido is 5,507,456 (October 2010 estimate) and the main city on the island is Sapporo, which is also the capital of Hokkaido Prefecture. Hokkaido is located to the north of Honshu and the two islands are separated by the Tsugaru Strait (map). The topography of Hokkaido consists of a mountainous volcanic plateau in its center that is surrounded by coastal plains. There are a number of active volcanoes on Hokkaido, the tallest of which is Asahidake at 7,510 feet (2,290 m).

Kyushu is the third largest island of Japan and it is located to the south of Honshu (map). It has a total area of 13,761 square miles (35,640 sq km) and a 2006 population of 13,231,995 people. The largest city on Kyushu is Fukuoka and it is divided into seven prefectures. Kyushu's topography consists mainly of mountains and the most active volcano in Japan, Mt. Aso, is located on the island. In addition to Mt. Aso, there are also hot springs on Kyushu and the highest point on the island, Kuju-san at 5,866 feet (1,788 m) is also a volcano.

Since it is in southern Japan, Kyushu has a subtropical climate and its inhabitants produce a variety of agricultural products. These include rice, tea, tobacco, sweet potatoes and soy.

Shikoku is the smallest of Japan's main islands with a total area of 7,260 square miles (18,800 sq km). This area is made up of main island as well as the small islets surrounding it. It is located to the south of Honshu and to the east of Kyushu and has a population of 4,414,955 (2005 estimate) (map). The largest city of Shikoku is Matsuyama and the island is divided into four prefectures. Shikoku has a varied topography that consists of a mountainous south, while there are small lowland plains on the Pacific coast near Kochi. The highest point on Shikoku is Mount Ishizuchi at 6,503 feet (1,982 m).

Tokyo is the capital city of Japan with a latitude of 35° 41' north and 140° degrees east. Located in the middle of Honshu Island's east coast, Tokyo is home to the Imperial Residence (with the Emperor's Palace). Japan's seat of Government and Parliament are located in Tokyo as well.

The climate in Tokyo varies according to the weather in Asia to its east, and the Pacific Ocean to its west. The average temperature is about 22.4° C with the temperatures milder than what would be expected at its latitude.

The majority of people living in Tokyo are Japanese with a few Asian minorities and even fewer foreigners. Of those Japanese, only a few are native to Tokyo, that is those whose families have lived in Tokyo for more than three generations. The influx of people from the country has created a shortage in available space, which makes living in Tokyo very expensive.
Posted by ST.ANGEL at 21.20 21 komentar: